The Vibrancy of Volunteering

The Vibrancy of Volunteering

Kayla and Fatoumata became friends through IFI and both shared their side of the story with us. To read Fatoumata’s perspective, click here.

Kayla, an IFI volunteer, and Fatoumata, an international student, crossed paths about 3 years ago in August of 2019. They both had signed up to help out at IFI’s annual furniture sale at the beginning of the school year in Cincinnati, Ohio. Kayla remembers noticing how beautiful Fatou was, not just in appearance but in the way she carried herself. She admits that at first she was intimidated by Fatou, but there was something else that made Kayla want to know the story of this beautiful and brave “Mali girl” and be her friend. Near the end of the sale, Fatou needed a ride to an appointment. 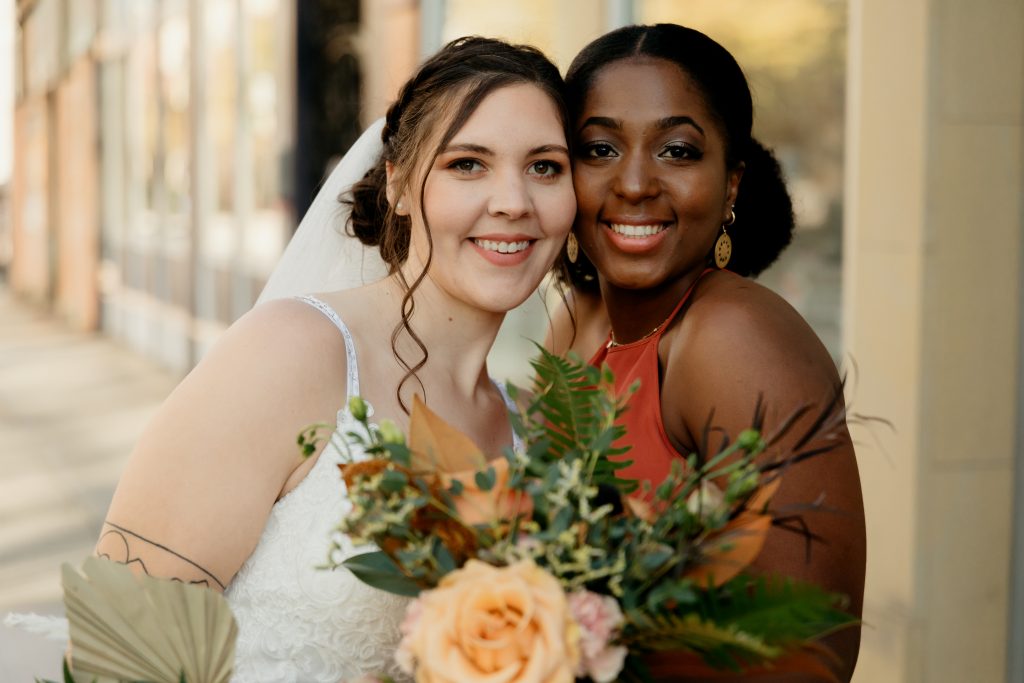 Kayla (left) and Fatoumata as maid of honor

Kayla saw that the other volunteers were busy cleaning up the event so she offered to drop Fatou off instead. While the appointment was nowhere near where Kayla lived, she says that she is so thankful she said yes to Fatou’s need. It was an amazing opportunity for Kayla to get to know the woman who would be standing beside her 3 years later at her wedding as her maid of honor and beloved friend.

Kayla first started volunteering for IFI in 2018 after recently returning to the U.S. She had been working in Laos, a country in Southeast Asia, teaching conversational English through ELIC. When she returned home, she was feeling heartsick, misunderstood, and undoubtedly missing Laos. She was surprised to find that she felt a little bit like a foreigner within her own family, friends, and country. Her brother helped her connect with a woman named Pat Durst who works on staff with IFI in Cincinnati. Pat took the time to grab a meal with Kayla and hear about her story, her time in Laos, and her heart for the nations.

Kayla was longing to be around people who shared similar thoughts, hearts, and experiences as she did and was overjoyed to know that something like International Friendships existed. 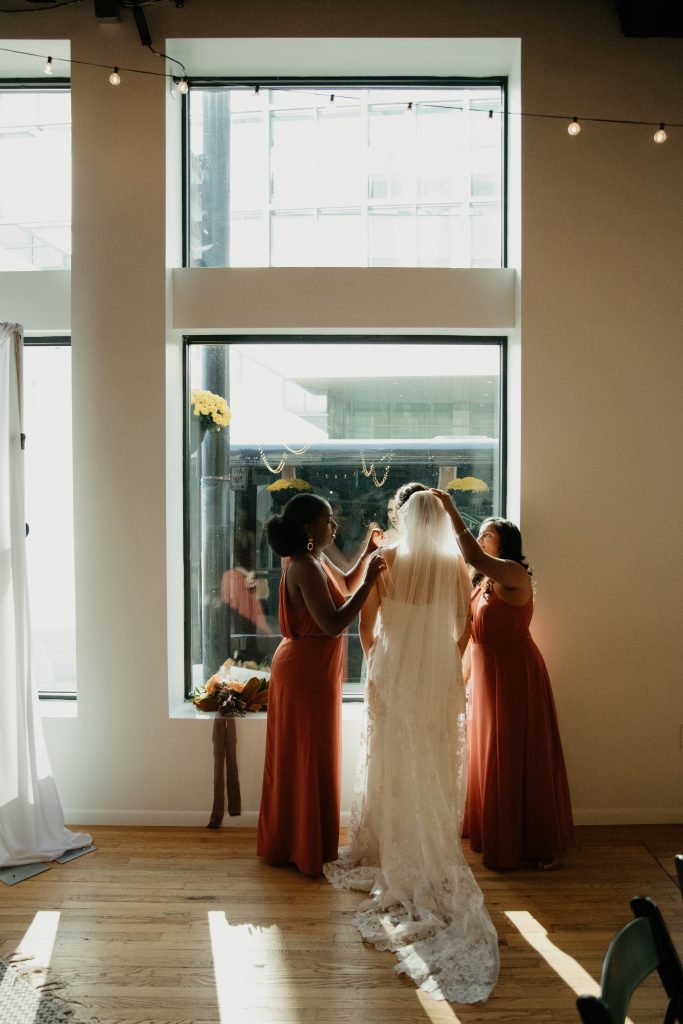 Pat told her about IFI and its mission to befriend and serve international students right here in our backyards. Kayla was longing to be around people who shared similar thoughts, hearts, and experiences as she did and was overjoyed to know that something like International Friendships existed. She remembers jumping right in; showing up that Friday night to an IFI Life Group, and sharing a meal with many new friends, staff members, and volunteers. From there, Kayla had opportunities to lead discussions, host a meal, and even plan a few student socials. IFI became like family to her; spending holidays with them and helping out with all of their annual events.

Kayla loved how much IFI made her feel at home. It wasn’t Laos, but she loved that there was something familiar about being exposed to different cultures, ethnicities, foods, and friends. Students came from all over the world, not just one country. God softened Kayla’s heart and gave her a curiosity for new friends from different backgrounds, beliefs, and traditions. She found the community beautiful, vastly vibrant, and so incredibly full of life. Kayla couldn’t get enough of it.

She found the community beautiful, vastly vibrant, and so incredibly full of life.

Kayla had a lot of friends, but when she met Fatou, she knew she had never had a friend like her. “We laughed (a lot), cooked and continued to cook, went on hiking trips, and always, always, always did our best to wake up early to see the sunrise. We exercised together, got into the Bible together, prayed together, cried together, and you better believe we would get our nails done every 2-3 months!” Kayla even had the privilege of helping teach Fatou how to drive. They just did life together.

Their friendship was tested in many ways, and they came to realize that they had a unique love for one another that was hard to explain. “She’s a life friend,” Kayla said. The more they let their walls down and allowed themselves to see and walk alongside one another, the more their beautiful friendship formed. Kayla can’t thank God enough for writing Fatou into her life at the time in which He did. Fatou showed up for her on days in which Kayla says she could barely show up for herself. In fact, Kayla went on to say, “Fatou is more than a friend to me, she is family, and I’m already grieving the day if she ever has to go back home to Mali. She better be ready to take me with her.”

“When I first signed up to volunteer with IFI I thought that I was the one who would be serving and be the blessing, but in return, I have been served, loved on, and blessed in more ways than I could ever explain or imagine.” 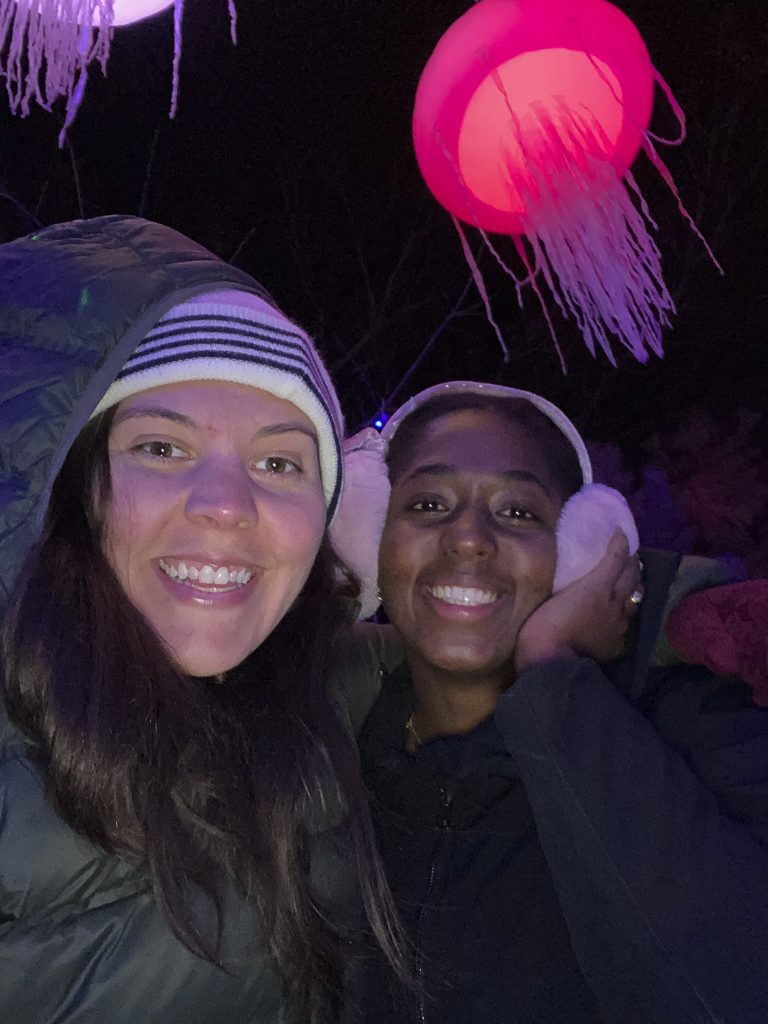 “When I first signed up to volunteer with IFI I thought that I was the one who would be serving and be the blessing, but in return, I have been served, loved on, and blessed in more ways than I could ever explain or imagine.” You never know when your kindness, willingness, and little step of obedience might just lead you to the most beautiful friendship you could ask for. Kayla believes that too often we find ourselves intimidated and quick to run from weaknesses or differences within one another, but at the end of the day, it’s God’s power made perfect in our weaknesses. His grace is sufficient, so she’s asking us to lean in, get uncomfortable, and become amazed at the goodness and kindness of God all around us. Don’t ever underestimate the beauty and power of differences. “Find something you love or enjoy (for me, that’s coffee shops, hiking/walking, pickleball, and exercise) and then invite others into that with you and simply see what God does! Take your little step of obedience and let God do the rest!”

“Find something you love or enjoy (for me, that’s coffee shops, hiking/walking, pickleball, and exercise) and then invite others into that with you and simply see what God does!”

Kayla decided to become a campus minister at IFI in Cincinnati*. She believes it was the only thing that made sense for her. Everybody around her could see how much Kayla loved her international friends and serving at IFI. Kayla realized that she had been running around for far too long trying to prove herself and putting herself in work environments and settings that might please those around her, but at the end of the day, to be an international friend and to have the role of extending “life-changing hospitality and friendship to international students out of the reverence for Jesus” was a literal dream job for her. So much of a dream job in fact, that Kayla could hardly believe that a role like it existed! Kayla’s international friends mean the world to her, and to get to spend her time and days loving and laying her life down for them is her true privilege and joy.