Gloria Kelios (IFI Dayton OH staff) uses a “God Box” to remind herself of God’s faithfulness, provision, answered prayers, and healing in her life.  What started 5 years ago as a reminder to herself has now become a vehicle for sharing God’s faithfulness with international students!

Gloria’s God Box is a collection of small items that remind her of the ways in which God has moved in her life, much as the pile of stones from the middle of the Jordan River reminded the Israelites of God’s faithfulness: they crossed the Jordan on dry land! (Joshua 4:1-8)  Each item has a story behind it. “It’s a good reminder that if God was faithful then, He’s faithful now.” Gloria says.

Gloria’s God Box has been a great conversation starter with students. Students often ask about it when they come to her home and see that the trinkets in the box in her living room do not match the rest of the decor. When students ask about the box, Gloria gets to share her God stories with them. Some students have even told other students the stories behind the items in Gloria’s box!

One story from her God Box occured in 2013, two months before Gloria’s wedding. Gloria was still searching for a wedding dress; some international girls were helping with her search. Gloria had five specific criteria for the dress. Despite having tried on almost 100 dresses, she had not found one that met all five criteria. God stepped in. Through a series of events, a stranger sent Gloria a wedding dress that had everything Gloria wanted and it fit perfectly!  The students who had  been gown-shopping with Gloria were completely dumbfounded.  It was undeniable that God had a hand in it!

A Chinese girl who had helped in the gown search asked whether the God who provided Gloria’s wedding dress could give her with a job on campus.  Gloria said that they could pray and trust that even if God does not give her a job, He would provide something good for her. They prayed that evening. The next day the girl had an interview on campus and got the job! The following day when they met to study the Bible, Gloria asked the girl what she thought after seeing Jesus answer her prayer. Without hesitation the girl told Gloria that she was ready to follow Jesus.  Gloria put a flower from her wedding dress in her God Box as a reminder of her gown-shopper’s answered prayer.

Suggesting that others make a God Box, Gloria says there is no formula for what to include.  It can be any small thing that reminds you of what God has done. 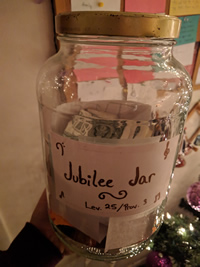 Larissa Swartz (IFI  Dayton staff), inspired by Gloria’s God Box, began keeping a God Box of her own.  Larissa also uses other tangible reminders of God’s faithfulness–a prayer-request bulletin board and a Jubilee Jar.  Larissa posts written requests on her bulletin board, where she can see them and lift them up in prayer.  Visitors who see what she is praying for often request prayer for themselves.

Proverbs 3:9-10 inspired Larissa to keep the Jubilee Jar:”Honor the Lord with your wealth,  with the firstfruits of all your crops; then your barns will be filled to overflowing, and your vats will brim over with new wine.”Larissa puts a portion of the tips from her serving job into the Jubilee Jar and gives that money toward needs around her, sometimes to her church, but  more often to others in need.  Larissa keeps a portion of it in her car to give to people on the streets. Similarly, when God answers a prayer from her bulletin board, Larissa puts the prayer request into her Jubilee Jar.  Like Gloria, Larissa says that her God Box, prayer bulletin board, and Jubilee Jar also show others God’s faithfulness and spark God-oriented conversations with her international friends and visitors.

Reasons to make a God Box:

Gloria was inspired to keep her God Box by Linny Lee Saunders, who has an online blog “Memorial Box Stories.”

Why not start your own God Box today?