A Korean Student’s Thanksgiving Among Friends

A Korean Student’s Thanksgiving Among Friends

It seemed a coincidence that his IFI Bible discussion group friends were gathering the same day to make dumplings together. Dumplings and songpyeon are different foods, but Myungjin found the process of making them similar.

“It was a very meaningful and pleasant memory to try each other’s dumplings in a family-like atmosphere.” 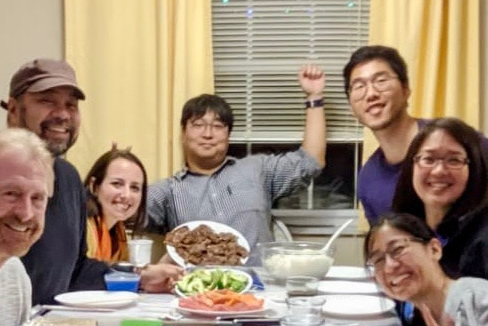 Alyssa, an IFI staff member who helps lead the group, was thankful for how God timed the dumpling-making event. “While it is easy to think about celebrating with international friends during American holidays, I sometimes forget to think about how my friends feel during the holidays they’re missing back home.”

Alyssa was glad to learn about Myungjin’s Chuseok traditions and help him feel at home during the holiday.

The church Myungjin attended in Korea, where he began to follow Jesus, taught from the Bible in a welcoming atmosphere. Looking for a similar community in the US, he found exactly what he was searching for in the friendly IFI group.

Myungjin is happy that “every Friday I am able to get to know Jesus better and learn the Bible more deeply.” Simple things like cooking together can mean so much to students like Myungjin!