Give to Jerry Shellhaas's Ministry

Please write “JERRY SHELLHAAS’ MINISTRY” on the check memo line or in the memo or account field in your online bill payer. 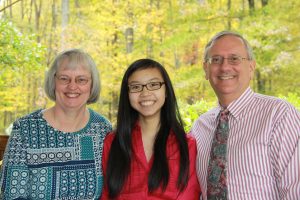 Jerry and Gwen attended Toccoa Falls College and majored in World Missions. Gwen graduated in 1985 and served God with World Relief for four years teaching English as a second language to Vietnamese refugees in the Philippines and Hong Kong. Jerry graduated in 1986 and served God for three years as an Assistant Pastor in Greensburg, PA. He was also ordained during this time period as well. They were reunited in Reading, PA in 1989, when Jerry accepted the position of Church-Planting Pastor and Gwen came home for a furlough. One year later, they were married and continued in home service for two more years. For reasons they didn’t understand at the time, God closed the door to overseas ministry. They were very disappointed, but determined to be faithful and serve God no matter what, no matter where.

They moved back to Ohio to be closer to family and friends and both took secular employment. God blessed Jerry and he moved up the corporate ladder to became a Director of Operations and later Pricing of a local logistics company. Gwen also moved up from an Administrative Assistant to a Network Coordinator at her place of employment. Gwen quit her job in 2005 to be a stay-at-home mom for their newly adopted daughter from China, Eliana. Jerry’s position was unexpectedly eliminated in 2008 and they again found themselves trying to understand God’s plan and purpose that He wanted them to fulfill. Once again, they determined to remain faithful and seek God’s direction.

While Jerry was praying, God prompted him to send his resume to International Friendships, Inc. Jerry didn’t know it at the time (God did), but IFI had been praying for someone with management skills/gifts for several months. They were having a hard time filling the position because it was only part-time. They saw Jerry’s management experience, but then also saw his college education in missions and years of ministry experience. After the interview process and much prayer, IFI and Jerry were both convinced that God had prepared Jerry for this ministry and had directed him to it. IFI offered him a full-time position in the dual role of Director of Administration and Campus Minister and Jerry accepted.

God, in His grace and goodness, directed Jerry and Gwen to IFI where Jerry can use his two strongest spiritual gifts, leadership/management and teaching/discipling. As the organization has grown, Jerry’s position as Director of Administration was replaced by a Chief Operating Officer that could do this job full time. Jerry is still using his gift of administration, just in other areas. He has several English conversation partners that he meets with on a weekly basis, helps with the English Conversation Club, helps plan & organize IFI events, activities and trips, disciples international students one-on-one and in groups, and facilitates a Friday night Bible discussion group in their home. He has also been teaching the Bible to international high school students attending Eliana’s school.

In addition, Gwen uses her skills and experience in TESL and her gift of hospitality as the Shellhaases use the home God has blessed them with to be a place of ministry and a home away from home for the students. God is even using their daughter, Eliana, in the ministry as she builds relationships and friendships with the students as well and talks about her faith as the Holy Spirit opens the door. Jerry and Gwen tell everyone that they are living testimonies to the truth of Romans 8:28 and praise God for leading them to this ministry and granting them the desires of their hearts by preparing them for and calling them to ministry with IFI. They are excited, humbled and honored to be serving in this important and strategic mission field that God has brought to them.

There are over 100 nations represented on the campus of Ohio State University, many of which are not open to tradition “foreign” missionaries. God has had a master plan for us as well as for making disciples of ALL nations all along. They are always in the process of funding their ministry. Some ministry partners are added while others fall off due to changes in their life situations. They are trusting God to lead them to and provide ministry partners for them who have a heart for evangelizing and making disciples of all nations, who will faithfully pray for them, and / or who will give love offerings to the Lord that are directed to their ministry so that they will have the resources necessary for a fruitful ministry. As the Lord leads you to partner with them, they will praise God for you, pray for you and thank God for faithfully providing ministry partners for them.